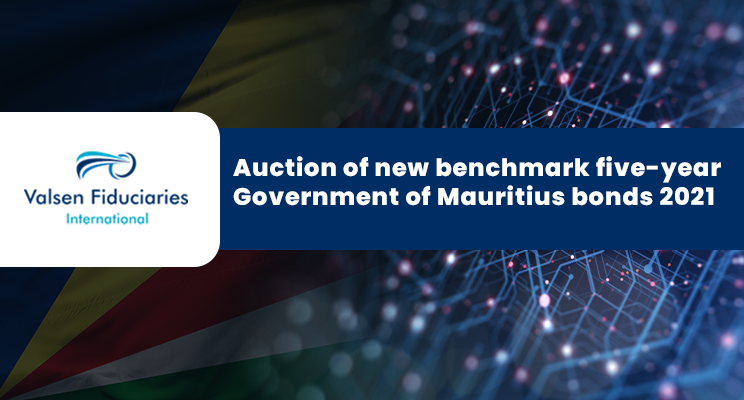 According to the issuance plan dated April 22nd, 2021 and under section 5 of the Public Debt Management Act 2008 and section 57 of the Bank of Mauritius Act 2004, the Bank of Mauritius (BoM) is pleased to advertise the issue of a New Benchmark Five-Year Government of Mauritius Bonds. They will mature on May 20th, 2026 through an auction to be held on Tuesday, May 18th 2021, for a nominal amount of Rs2,500 million for settlement on Thursday, May 20th 2021.

The Bank will accept bids from Primary Dealers for this auction on the same day, that is, Tuesday, May 18th, 2021, on a yield basis quoted to two decimal places, in multiples of Rs100,000. Primary Dealers may submit, up to a maximum of five bids for their own account, one for each bid yield, which, however, must not exceed the tender sum in totality.

In the event of over-subscription of the Bonds, the BoM may accept a higher amount than the amount listed on the tender.

Results of the Government of Mauritius Bonds auction

The coupon rate for this auction will be set equal to or higher than the lowest accepted yield of the auction that will be held on Tuesday, May 18th, 2021. Bidders whose accepted bids carry yields less than the coupon rate will have to pay a premium (in addition to the face or nominal value). Successful bidders will, in all cases, receive the yield that they specified in their bids.

The Bonds will be issued dated May 20th, 2021 and will mature and be redeemed at par by the BoM on May 20th, 2026. At its own discretion, the Bank may allow the Bonds to be redeemed or converted into other instruments at market rates before maturity.

Interest on these Government of Mauritius Bonds will be payable half-yearly on May 20th and November 20th by the Bank during the currency of the Bonds to the Primary Dealers’ bank account. Interest will cumulate on the Bonds from May 20th, 2021, on the minimal amount allotted and will cease on their maturity date.

The Bonds will be published in Book-Entry form, and records will be kept at the BoM. The Bonds can be freely traded and are also transferable from between investors in multiples of Rs50,000.

The BoM reserves the right to either accept or reject any bid either in full or in part, without giving any reason in respect thereof.

How Valsen Can Help

The experienced staff of Valsen Fiduciaries Group our global network allow us to provide high-quality services in several jurisdictions. We are at your disposal to help you further clarify and understand the benefits you can derive from auctioning the Government of Mauritius Bonds. Please contact us through [email protected] or +248 2 525 217